Since 1989, more than 20 test cells have been installed by the University of Waterloo for field research purposes at CFB Borden and another site in southwestern Ontario. These have ranged in dimensions from 1 by 3 to 9 by 9 m, and extended to depths of 3 to 15 m. Several of these cells were constructed with concentric double walls, a configuration which facilitates rigorous hydraulic testing.

Figure 1 shows a schematic diagram of such a double-walled cell in which a hydraulic test was undertaken at Borden. The cell extended to a depth of 14.7 m through a surficial sand aquifer into an underlying aquitard.

As the test proceeded, the decline in water level in the internal cell was monitored with time. Corrections were made to these levels to account for losses by evaporation.

In applying an analytical solution to assist in interpretation of data, it was assumed that the underlying aquitard was impermeable and that all leakage from the internal cell occured laterally through the barrier wall. In reality, some vertical leakage into the underlying aquitard would have occured, so this assumption would result in an overestimation of the hydraulic conductivity of the barrier. 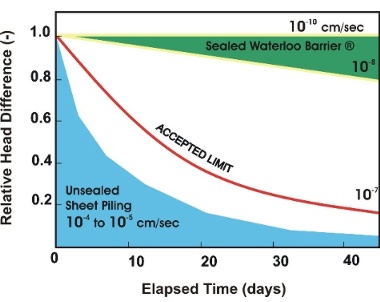